In 2014, a coalition was formed to focus on the future of the Glenn Dale Hospital Historic District (“Site”). Members of the coalition included Councilmembers Todd M. Turner (4th District), Dannielle M. Glaros (3rd District), Andrea C. Harrison (5th District), several members of the Prince George’s County State House and Senate Delegations, staff from the Office of the County Executive and the Maryland-National Capital Park and Planning Commission (M-NCPPC), the owner of the site.

The site is composed of 206 acres and is situated on the east and west sides of Glenn Dale Road (MD 953) and north of Annapolis Road (MD 450), in Glenn Dale, Maryland. Approximately 60 acres of the site form its developed core and the remaining acreage is being reserved for a future park. The core is improved with 25 structures, which supported the Glenn Dale Tuberculosis Hospital and Sanatorium from 1934 until 1982.

The site was acquired by the M-NCPPC in 1994. Prior to this acquisition, the Maryland legislature passed a law restricting development of the 60-acre core of the former hospital site to a Continuing Care Retirement Community (CCRC). A CCRC is a retirement community that provides residents with a continuum of care beginning with independent living and progressing to assisted living, memory care, and nursing beds. 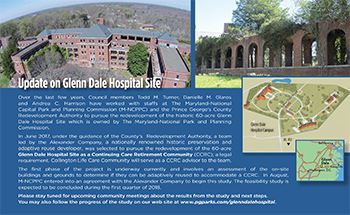 
A comprehensive assessment of the buildings and the grounds of the site was completed in July 2015. This study documented the condition of the structures and recommended various approaches to caring for the site, including security and consistent maintenance.


M-NCPPC maintains a no-trespassing policy for the 60-acre site and has installed a comprehensive surveillance system. Park Police presence will continue with random patrols and an on-site Park Police residence.


In 2015, M-NCPPC conducted a comprehensive clean-up of the site including the removal of 26 dead or dying trees, mowing, brush clearing, tree pruning, fence clearing, and the removal of debris from the roadways. Regular on-going landscape maintenance of the interior roads and lawns has continued throughout 2016 and 2017.


While adaptive reuse of the site and the prospect for additional complementary new uses offer a potentially exciting economic development opportunity for Prince George’s County, past efforts to sell the site to a development entity have been unsuccessful. Key issues have been the market viability of the mandated CCRC use, and the cost for remediation and preservation of the existing historic structures.


In March 2015, M-NCPPC engaged the Redevelopment Authority of Prince George’s County (RDA) to provide real estate advisory services to explore the feasibility of adaptive reuse of the site.

The RDA engaged a senior housing consultant to perform a Market Study to determine if there was sufficient market depth to support a CCRC. The scope of the Market Study included the definition of a geographic market area for most of the potential residents, compatibility with surrounding land uses, demographic analysis, and the identification and analysis of existing senior living facilities.

The scope of the Market Study did not include an evaluation of the cost to remediate or adaptively reuse the existing buildings and the impact on the feasibility of developing and operating a CCRC. The Market Study concluded that there is sufficient depth to support a CCRC at this site.

A Request for Qualifications (RFQ) for the Adaptive Reuse of the Glenn Dale Hospital site was issued on March 18, by RDA on behalf of M-NCPPC. The RFQ is the first step in the selection of a qualified development team with the experience and capacity to determine the economic feasibility of the adaptive reuse and development of the Historic Glenn Dale Hospital campus, consistent with the current CCRC use restriction.

The RFQ opportunity was extensively publicized and promoted nationally by RDA and Preservation Maryland to senior housing developers, CCRC owners and operators, and development companies specializing in preservation and adaptive reuse of historic properties. In addition to the RDA and M-NCPPC , other venues and media where the RFQ was promoted include the Urban Land Institute’s Urban Land Magazine, Marketplace Trends Conference held in Washington DC and at its Spring Conference held in Philadelphia; Senior Housing News Spring 2016 Summit and Online Media Platform; and the National Trust, PreserveNet and Preservation Directory .

Two development teams responded to the RFQ. The responses were reviewed and ranked by a Proposal Analysis Group (PAG) consisting of staff from RDA and M-NCPPC, and the county’s Revenue Authority. Preservation Maryland staff served as technical advisors.

The Alexander Company was selected to conduct studies to determine the feasibility of adaptively the site as a CCRC. A community presentation on the credentials and experience of this company and the proposed feasibility strategy to explore the adaptive reuse of the Glenn Dale Site was held on February 22, 2017.