In 1911, Congress appropriated the first funds specifically for aeronautics when it allowed the Signal Corps to order new airplanes. The money paid for 2 Wright B aeroplanes, 2 Curtiss aeroplanes, and 1 Burgess-Wright aeroplane. The Signal Corps returned to College Park but leased more land than during the 1909 training. The Army Quartermaster Department leased the 200-acre field for $325 per month and erected four temporary wooden hangars along the railroad tracks.

Second Lieutenant Henry H. Arnold and Second Lieutenant Thomas DeWitt Milling were the first flight instructors for the new flying school. After training at the Wright Company's flying school, near Dayton, Ohio, Arnold and Milling arrived in College Park on June 15, 1911. Within 5 days, Captain Charles deForest Chandler reported to College Park as commanding officer. Over the next 2 years, over a dozen other officers were assigned to College Park either as flight instructors or students. 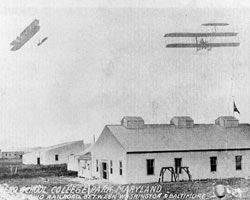 In addition to flight training, the military pilots tested the limits and uses of military aviation. They explored aerial photography, cross country flight, flying at night, aerial gunnery and bombsight, and more. Since the Wright and Curtiss aircraft were dramatically different designs, the pilots also compared the machines and provided information to the Wright Brothers and Glenn Curtiss about the strengths and weaknesses of their products.

Due to the lack of housing in the village of College Park, the officers assigned to the aviation school resided in Washington and commuted the 7 miles to the airfield by car or train. The enlisted mechanics were housed in one of the hangars on the field, and stood guard over the aircraft as an additional duty. The initial 15 mechanics came from Fort Wood, the island where the Statue of Liberty now stands and where the Army performed balloon tests. A second detachment of enlisted mechanics reported to College Park from Texas in August 1911. Flying in Texas was halted after Lt. George Kelly's fatal crash. The Signal Corps also hired a civilian aviation mechanic, Henry S Molineau, to instruct the enlisted men in maintenance of the aircraft.

The Army Aviation School moved to Augusta, Georgia for the winter. When the aircraft, personnel, and equipment returned to College Park on April 2, 1912, the entourage included several more officers, 2 new Wright machines, and a new 2-seater Curtiss plane. During 1912, the aviation school continued to produce numerous "firsts" for American aviation and thrilled local residents and the press alike.

Unfortunately, there were also 2 fatal crashes at College Park in 1912. Lieutenant Leighton Hazelhurst and Mr. A. L. Welch were killed during testing of a new Wright Model C on June 11, 1912. Lieutenant Lewis Rockwell and Corporal Frank Scott died during Rockwell's final test before earning his military aviator's license. Scott was the first enlisted man to be killed in a plane crash.

In November 1912, the Army Aviation school moved to a warmer climate to continue their flying. During the winter, officials decided to keep the aviation schools where year-round flying was possible. The Army closed the College Park school and shipped its equipment to North Island, San Diego, California, making it the Army's first permanent aviation school.
/QuickLinks.aspx